First of all, depending on the type of mollusk and its habitat all the pearls is divided into saltwater and freshwater pearls. Any pearls produced by mollusks that live in salt waters, is the sea pearls. The four most common types of seawater pearls: Akoya pearls, Tahitian black pearls, White South sea pearls and Golden South sea pearls.

Freshwater pearls are produced by bivalve mollusks Hyriopsis cumingi and Hyriopsis schlegeli, which live in freshwater ponds, lakes and rivers in southern China, Japan and the Delta of the Mississippi river in the United States. The main world producer of freshwater pearls is China, which accounts for nearly all freshwater pearls sold today.
Freshwater pearls are usually not as round as the sea, and do not have such a bright shine. However, they come in a variety of shapes and natural colors and are less expensive than setwater pearls, making it very popular with young people and designers.

Seawater pearls are Akoya (Akoya) is a small oyster "Pinctada fucata martensii", also known as the Akoya (Akoya) oyster, live along the coast of Japan and China. Pearl Akoya (Akoya) has special luster and are considered the classic pearl. It has a round or almost round shape, which makes it ideal for use in jewelry such as necklaces and bracelets. AKOYA pearls are usually white or cream color with shades of pink and silver, and is usually small, ranging in size from 2 to 11 mm stones.

Tahitian pearls are the only pearls in the world that has natural black color. Rare, exotic, and luxurious, Tahitian pearls are produced by Pinctada Margaritifera oyster native to Tahiti and Islands of French Polynesia. These sea oysters are very large, the size of the plate, so the diameter of the pearl can vary from 8 to 18 mm. Tahitian pearls come in a variety of shades from silver color to a deep black, with green, blue and purple shimmer.

Golden South sea pearls are among the rarest and most valuable pearls in the world. These valuable pearls are produced famous gold-lip variety of oysters Pinctada Maxima which live off the coast of Australia, Indonesia and the Philippines. The average size is 10 to 13 mm, are also found unique pearls are very large in size about 20 mm.
The period of growth of the pearls ranges from 2 to 4 years, so, in order to pick up pearls of the right size, shape, color and quality for one necklace, you need to spend more than one year.

White South sea pearls are valued for their size and luxury satin white color and luster. These valuable pearls produced famous silver-lip Pinctada Maxima that lives off the coast of Australia, Indonesia and the Philippines. Due to the limited area of cultivation and long period of growth, white South sea pearls is the most rare of all types of pearls. Mostly white South sea pearls have a Baroque form, and is used to expensive designer jewelry. Only a small part of the pearls has the correct spherical shape. Necklaces of these pearls have a very high price and can cost tens of thousands of dollars. 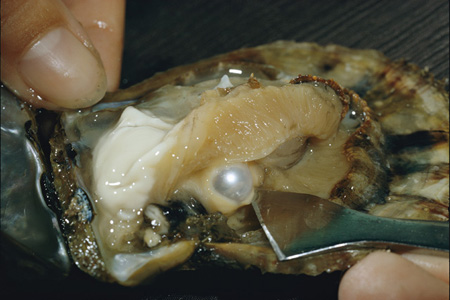 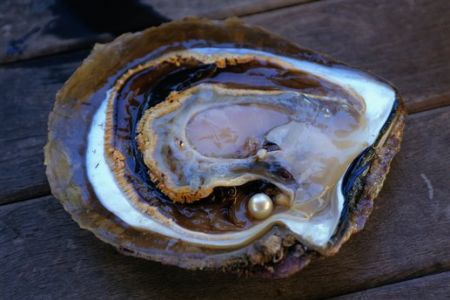